In lieu of the weekly Reflection from our Head of School column, by Benjamin Mann, check the video below of Benjamin and the students and faculty of Schechter Manhattan in this special Purim video, celebrating 70 years of the State of Israel. Happy Purim!.

Students are working on their nonfiction books, using their passions as inspiration.

“I went to Wodloch and I Sat rand the CamP FIRE”
(I went to Woodlock and I sat around the campfire.)
– Landon

In our Israel and Water unit in Theme, we learned about the challenges Israel faces with providing fresh water for its population and the innovative process of desalination. We talked about other countries, places, and groups of people that could benefit from desalination and why they could benefit. Students explored the benefits and challenges of desalination in partner and group work. Please find an excerpt of our work attached!

In preparation for the celebration of Purim, the 5th grade students studied the laws of reading and hearing the megillah, focusing on the unusual requirement to say the shehechiyanu prayer before both times it is read.
The 5th grade students responded tot he following question:

On Purim, why do we say “shehecheyanu” at night and during the day? What is special about this?

We say “shehecheyanu” at night and during the day on Purim so that the experience of hearing the Migillah read is like we are hearing it for the first time. This is special because instead of getting bored and feeling like you have heard the story a million times you feel like it is the first time. It is also more powerful to say it twice. It makes it more powerful because you don’t read it and then forget it two hours later. Saying “shehecheyanu” twice makes it seem fresher and more powerful.
–  Annabelle

In this exhibition unit, students conducted an in-depth examination of literature, by way of an independent study, to uncover the ways in which novels help us to better understand our society and its systems and structures. 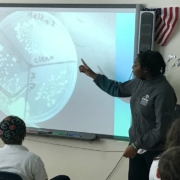 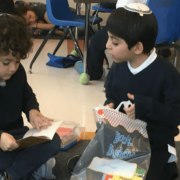 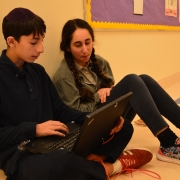 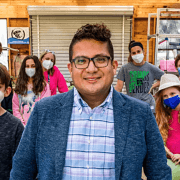 Exciting Announcement – Next Head of School 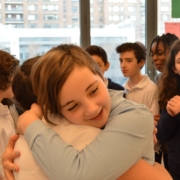